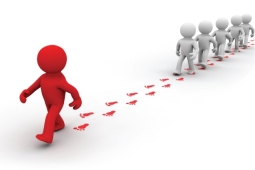 If we are asked to describe a leader we will probably attribute characteristics such as energetic, hardworking, idea generator. On the other hand, our description of a follower may not be as flattering. We would probably describe them as lazy, unwilling, and uncommitted. But we have also seen that same person exhibiting the latter behaviours as a follower, and the former ones when that person becomes a leader. Why does that happen? What changes when we transfer from one position to the other?

To illustrate my point, let me take you on a time-trip some years ago when I was serving in the army. I served as a soldier and as an officer, hence as a follower and as a leader. I recall a specific memory when we were running for exercise. I believe we all have an image in our mind’s eye of a squad exercising, with everyone being aligned. When I was in the line I felt sometimes frustrated and bored, and I was certainly feeling tired much faster. And then I became an officer and I found myself out of the line, leading the squad. The physical energy expended was much greater. I was running with my soldiers, plus I had to speak loud giving the rhythm, and putting them back to pace. Moreover, I had to run back and forth to check the back lines. All these required more effort, however I wasn’t feeling tired at all. On the contrary I felt full of energy, and motivated.

Why does this happens? Because as a leader you feel the excitement of leading others, the responsibility, and the joy of creating and molding others, because even as a squad leader you build body and discipline for your soldiers, preparing them for the battle. The mere title of “Leader” creates an internal driving energy.

The same applies in the workplace between managers and their subordinates. It is easier to give orders than to follow orders. As a leader you are free to “move” around and make decisions, and that’s mind alleviating. As a leader you can better fulfill your plans of personal development, hence your motivation is increased. As a follower, on the other hand, you usually don’t know what’s coming, you hang on your leader’s decision. His/her brain generates ideas, and that is an energy booster. The leader combines ideas, implements a lot of thinking and then the decision come. As a follower, however, you are not aware of that process. You are just presented with the final decision and you have to follow, to execute the order. This is frustrating most of the times, because people tend to resist every time something new comes up. The unknown takes more effort to be understood and our brain is inherently lazy, hence the resistance. People need to understand and be motivated in order to spend and allocate their energy.

Bear in mind all of these ideas when you lead people. Be aware of their feelings and put them in the game should you want them to feel the same passion as you. You cannot put them under constant change nor make them feel the fear of the unexpected. Share your thoughts and make the changes, but communicate their purpose first. Give them freedom to make some of their own decisions, and make some decisions on their own. Most importantly give them the opportunity to fulfil their ambitions, to be the leaders of their own self. Then they will be more willing and motivated to follow you, and they will surely feel more energetic and vigorous. Don’t forget, giving orders is easier than executing them. Don’t demand things that even you are not able to deliver. Stand by your followers, lead them by example, give them direction whenever they lose it, execute with them if need be. Finally, remember that leading is more about helping others do their jobs than them helping you do yours.

*My special thanks go to my cousin Irene Clevenger for proofreading!